Leaders are the ones who stimulate the change in various fields. There have been many leaders throughout history who have been responsible for change to happen. Some famous leaders of 20th century are Mahatma Gandhi, A.P.J Abdul Kalam, Mother Teresa, Martin Luther King Jr., Barack Obama, Dalai Lama, Steve Jobs to name a few. When you start analyzing the lives of these people you can find certain things common in them; though most of them are from varied backgrounds. These common things can be the ideals or traits which these great leaders made it mandatory to follow in their lives. The word leadership is often related to politics in the real world. Great leaders can also be a sportsperson, a doctor, an engineer, a business person or anyone who follows these ideals can be proclaimed as a leader.
TRAIT #1: AN EMOTIONALLY COMPELLING CAUSE
The primary and the most important ideal which ordinary people follow to blossom into a great leader is that; they have a specific goal in their mind and persevere every day to achieve it. They are laser focused on their goals and keep every step in their life with a purpose. They constantly keep thinking about their objectives which at some stage mix with their emotions and mature into an emotionally compelling cause. If Mahatma Gandhi was not thrown out of the train in South Africa, Sathyagraha Movement and Non-Violence (Ahimsa) would not have happened. That insult happened to be the emotionally compelling cause for Gandhi and it kept reverberating in his mind. When he came back to India he applied the same concepts and made our independence possible. Great leaders are the ones who ritualize wisdom and achieve tangible results.
TRAIT #2: HUMAN RELATIONS
When you want to become a great leader, then managing people is another critical aspect to taste success. A cordial relation with the people is the fulcrum of good leadership. a leader’s character has to be devoid of any immorality. He has to radiate a lot of enthusiasm and have a charming personality. A great leader should be an patient listener lending his ears to all the problems of the people and consistently compassionate no matter whatever the situation is. Leaders who are respected universally always maintain their buoyancy by promise keeping, showing compassion and truth telling. The semblance of these qualities can be noticed in any great leader and makes him a good people’s manager.
#TRAIT 3: TEAM UNITY
This ritual will be most appropriate for leaders in business fields and in team sports. In a big organization where hierarchy exists; unity between top level executives and bottom level workers is of prime importance. When it comes to sports; games such as basketball, cricket and football needs a lot of synchronization between the players to win their game. In a team or in an organization when someone underperforms, the remaining people have to perform exceeding their standards to keep their stability intact. Recognizing high performers and rewarding them regularly will increase the team’s positivity. When an individual performs well, appreciation comes to him directly. But in a team, every member cannot perform to his highest standards all the time. The team is mostly rewarded but individuals who contributed for the team’s success are forgotten. Hence, giving a genuine appreciation to persons who perform well in a team will boost his confidence and in turn the team also performs well.
#TRAIT 4: ADAPTABILITY AND CHANGE MANAGEMENT
This ritual is also about successful leaders in business fields. Getting accustomed to change is one of the biggest challenges in today’s world. Earlier change was happening slowly and we had enough time to adapt ourselves to the change easily. Nowadays, change is happening at a rapid pace and updating ourselves about the change has become very difficult. Considering all these factors, change management finds its place in the ideals followed by great business leaders. On how to recognize the change and manage it let me illustrate with an anecdote. Cadbury, one of world’s most famous confectionary companies had a sudden decline in their market shares. Their products were always preferred by people yet they couldn’t find out the actual reason for the huge drop in sales. When this thought was bothering the company’s CEO; he gave some money to his daughter in a supermarket and asked her to buy chocolates. His daughter bought a lot of chocolates but none was from the brand Cadbury. He’s shocked to see this and asked if she don’t like Cadbury’s chocolates. The girl’s answer was “She couldn’t find any Cadbury’s chocolates.” On researching, it was found that older brands were kept at the top stack in supermarkets which was less accessible to kids and hence the sales had gone down. The CEO immediately instructed all his retailers to keep Cadbury’s chocolates at the bottom stack and then Cadbury regained its dominance in confectionary business. Thus, even a small aspect can contribute to a big change in business.
#THE GOLDEN CIRCLE
The Golden circle is a method which most great leaders follow to win. This trustworthy method is a recipe for success and has been formulated after a lot of research. Leaders of all fields especially from business have adapted this Golden Circle principle to taste success. 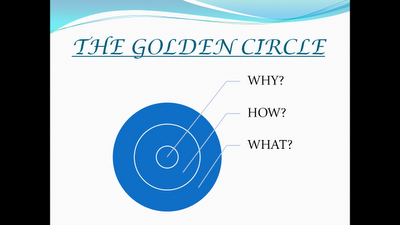 Most ordinary people like us focus mostly on the “What?” while great leaders are the ones who focus on the “Why?” Just like the above diagram, ordinary people are more in number and people out of the ordinary popularly called as Great Leaders are very few. The reason for this is that leaders believe in what they do and also know why they do it. Scientifically speaking, this golden circle can be correlated with the cross section of human brain. A cross section of our brain when looked from the top has two major regions called Neocortex and Limbic region. Ordinary people’s brain are mostly controlled by Neocortex which is responsible for logical reasoning, factual thinking et cetera while the brains of great leaders are predominantly controlled by Limbic region which controls our feelings. It makes us emotionally attached to a purpose which becomes the driving force for a leader and makes him attain tangible results. Thus, by doing things with a purpose; the probability of reaching success is very high.
I’ve explained to you scientifically about the Golden circle. In the real world, most organizations know what they do and how they do but not why they do. They think, act and communicate having the facts in mind but very few organizations know why they do something. These organizations that follow the Golden Circle inside out; that is from why? to what? are the ones who become great. The size or the capacity of the organization is immaterial when they are totally absolutely sure about your purpose. When you are passionate about something your sustenance in the field is guaranteed regardless of the competition.
#SUMMARY
“Leaders are not born; they are made!!” is a popular quote. Every single person on this earth can become a great leader provided he cultivates certain habits. None can become a leader in a single day; your attitude, perseverance, resistance will accelerate your chances of becoming a leader. Hence, try to imbibe these rituals and golden circle principle in your life and you can see a noticeable change in the way you approach your life. A President, A CEO of a company or A Captain of a cricket team are not the only people who can be categorized as leaders. Even a street sweeper who does his work perfectly and is passionate about what he does is a great leader. He is an example to others on how a street sweeper should be. Martin Luther King Jr., once said “A man should do his work so well that the living, dead and the inborn could do it no better. If it all happens that he’s a street sweeper then sweep the streets like Shakespeare wrote poetry; sweep the streets like Michelangelo painted pictures; sweep the streets like Beethoven composed music.” Thus, whatever you do give you’re best shot at it which will lead you to the path traced by great leaders.